I usually appreciate Louis Theroux’s documentaries, but this particular one – about autism – was rather painful to watch. It’s sad and worrying to see how harmful attitudes and practices get propagated and normalised in mainstream media, including in shows that you usually respect and enjoy. After watching the documentary, I felt the need to list all the aspects I found troubling. It wasn’t all bad for sure; there were some okay bits. But here is a not-so-short list of where I think it went wrong and how this episode constitutes a bad and dangerous (but unfortunately all too normal) (mis)representation of autism:

– Don’t call it “Extreme Love”, as if loving us requires super human amounts of effort and sacrifice

– Don’t stare at an autistic person or repeatedly try to elicit a direct verbal response when it is clear they don’t want to engage. Don’t represent this lack of “normal” response as a tragic abnormality

– Meltdowns are NOT tantrums! (And perhaps find a better strategy than sitting on or forcibly restraining your child)

– Where were the AAC devices?

– Don’t enforce compliancy for the sake of compliancy

– Don’t ask a parent whether they wish for a cure. Parents, don’t say that yes, of course you want your child to be cured

– Do not imply that your autistic child is hard to love. Do not say that you don’t get much joy from them, and especially not when they are standing right there! (Wtf! No wonder you have a strained relationship with your child if this is what they are hearing you say)

– Don’t heroicise the parents, saying it is a miracle that they can live with us

– Don’t say God gave you an autistic child in order to test you, to make you a better person or because he knew you could handle it

– Don’t scream at your kid to stop screaming (unsurprisingly, this only provoked more screaming)

– Don’t say that one autistic person is better than, improved or “higher” up than any other

– Don’t say that your child is trapped in their own world, oblivious to what day it is or to anything going on around them

– Don’t imply that we are aggressive or dangerous

Is this too much to ask?

This blog used to be about autism. Now it is more-so about other things. But things that autism happens to intersect with (which is pretty much everything given that I am autistic and this blog is about me, or at least written from my perspective). So really it is still about autism. But autism &
At, aut, and? 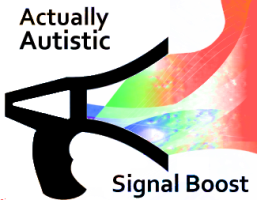